It wasn’t long after the closing credits for The Avengers had ended that I found myself saying “We need a Justice League movie.” There’s really no excuse for there not being one already. With the success of Marvel’s cross-over films, I had to ask myself, “Why hasn’t DC started doing this?”

Well, now they are. Except they’ve decided to skip character development altogether. Instead of doing things the smart way, giving Batman his own movie, Wonder Woman her own movie (which is long overdue, considering we’ve yet to have a standalone female superhero film), and the others their own movies, they’ve opted for a backdoor Justice League film in place of the Man of Steel sequel. END_OF_DOCUMENT_TOKEN_TO_BE_REPLACED

Batman Vs Superman Bows Out of the 2015 Bloodbath

This is interesting. Perhaps, it means that WB is hesitant about its film. After the lacklustre (in my opinion misguided) luke warm response to Man of Steel, perhaps they are feeling the strain and don’t want to compete with the tried and true Avengers. Warner Bros have blinked and pushed their much anticipated Batman/Superman film back to May 2016. 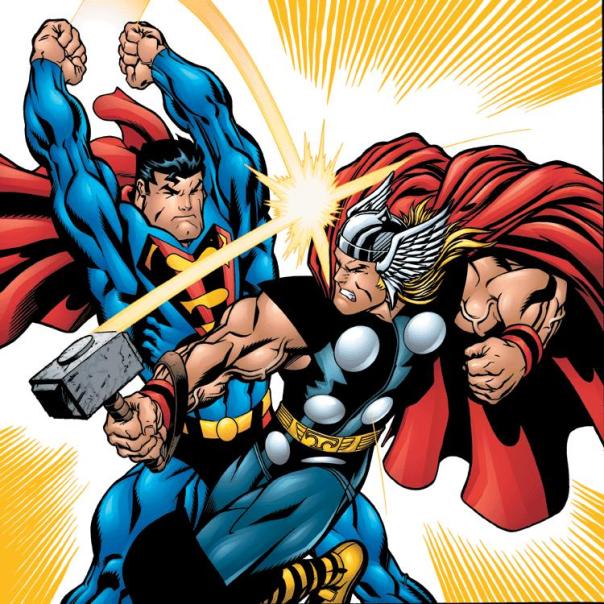 Superman is considered the very first proper superhero. He debuted in 1938, as a creation of DC, and forever changed the comic book. His debut forced the medium to change its focus from violent guignolesque tales of horror to larger then life stories about beings with extraordinary skills. Superman was, and still is, very much an infallible character, meaning that he is a beacon of good, who is almost omnipotent and above reproach. He has even defied death. Though Superman is the be all and end all of superheroes, and I am the first to defend his importance to any comic book nerd out there who refutes that claim, his character is, at its core, uninteresting. Countless writers have had difficulty reconciling his seemingly golden sensibilities with the modern need for edge and mortality. Zack Snyder‘s version might have been the best attempt, thus far, at doing this. However there is no need to wrestle with this problem. There exists already a realist version of Superman. He carries a hammer and hails from Asgard.

Thor is the better version of Superman for he is more authentically human.

I am sure you are now squealing: how is Thor, a confirmed god, more human then a adoptive alien raised since infancy by two Kansas farmers?

I am using the word ‘humanity’ to describe his reality. Humans exist by adhering to certain physical laws: the law of gravity, humans need to breathe, they need to eat 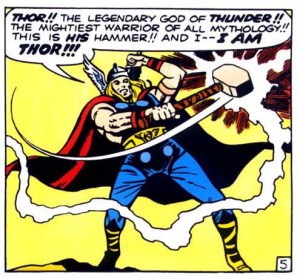 and so forth. In his debut, which is what I am reading today, it is established that Thor uses his supreme strength to twirl Mjolnir (his hammer) and slingshot it into the air. He then wraps the hammer’s thong around his wrist which allows the force from his throw to carry him into the air giving him what seems to be the power of flight. In physical terms this is more properly called ‘guided thrust;’ a term I am borrowing from Stan Lee himself. Superman, however, just flies. It is never described how, but is just accepted. Thor must live by physical laws giving him natural obstacles that he must overcome and therefore, he is not omnipotent. Superman circumvents those laws and sometimes outright breaks them.

Both of these characters have an important relationship with their alter egos; Thor’s being Don Blake and Superman’s being Clark Kent.  Don Blake is a human doctor who becomes his Asgardian alter-ego by picking up a stick which through contact morphs into the mighty hammer Mjolnir. I am not interested in later retconning which established that Don Blake is actually Thor the whole time, Mjolnir or no, I am purely dealing with his first Silver Age appearances. In this time, Don and Thor are two sides of the same coin not just an alias.

Clark Kent however is an alias. Superman or Kal-El is always his Kryptonian self, glasses or no. Because of this trope, Superman stories always end up being about an alien pretending to be human. This gives him a slightly sinister edge, and an edge that was wonderfully investigated by Snyder.(The idea that Superman’s powers are more suited to a villain is further explored through Alan Moore’s Doctor Manhattan in the Hugo Award winning  Watchmen).

Because of Stan Lee’s establishment of Don Blake as a human, and a crippled one at that, who is dealing with a new found power; Stan creates a human connection with, what has been up until this point, an incomprehensible archetype. 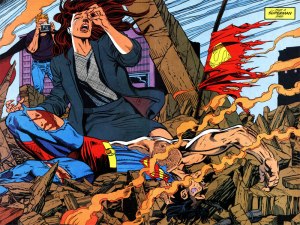 The death of Superman.

Superman’s incomprehensibility is the crux of his character. The normal mortal can’t ever fathom just how powerful he is. Superman is able to change weather patterns, tidal forces, and in a movie, even turn back time. He also famously is the first non supernatural character in comics to literally defy death itself. He is, in short, divine.

I am sure this will not be news to you that Superman is often compared to the christ figure archetype. The comparison is obvious:  a young boy from a world of incomprehension sent to Earth, by his father, to be raised by a surrogate human family to one day become the saviour of the human race.

You’d have to be ignorantly blind not to see the similarities. This maybe the reason the legend of Superman has oft been so difficult to adapt in the modern Agnostic/Atheistic world. There are just too many questions and components of his character which relies on faith. Indeed, you could say that the legend of Superman is far more important then the character himself.

What about Thor’s divinity?

This issue sets up Thor, not as a character that is godlike, but one that is literally a god. A god who lives by rules. Thor doesn’t have a need to save the human race. He possesses no compulsion to uphold the greater human good.

In Don Blake’s first fight with the Kronans (retcon: at this point they were known as Saturnian Stonemen) he fights them not out of a higher need to save the human race, but out of a need to save himself (and, a little bit out of an intrinsic joy of battle). Thor is selfish. Yes, he cares what happens to Earth, but he is more interested in his own survival. This selfishness subverts the holier then thou motives of Superman.

Though Thor’s debut changed the face of comics, I do not mean to claim this first 14 page appearance conveyed all these subversions. Some of these observations that have been made are retroactive. As you well know, dear Extremis reader, I have read quite a bit of early Thor appearances.

Having read about a year’s worth of appearances I have begun to grasp just how much like Superman he is. This similarity is further shown through the ‘will they wont they’ vibe Don has with Jane, which is just like Clark and Lois. Thor is also haunted by the mistakes and villainy of his kind. Compare Loki with Zod, you’ll see the similarities. The Asgardian also struggles with his own type of Kryptonite. Don needs his hammer to remain powerful.

When he puts it down he becomes mortal again. Likewise, Superman is rendered mortal by encountering minerals from his destroyed home world.

I could go on for pages and pages about the similarities and subversions of these two characters, but at the end of the day, this is supposed to be a simple review. The issue that I have been referring to is extraordinarily simple. Very little goes on in it aside from describing how Don Blake becomes Thor. There is a minor battle with faceless stone aliens but, frankly, there are very few panels devoted to it.

Much like the Fantastic Four is a parodic Justice League, Thor is a parodic Superman. He is the beginning of a movement in comics, that started during this period, whose goal was to steer the medium from relying on archetypes to realism.

How hilarious that it took an actual god to point out the issues with a pretender god.

Pros: Don Blake’s haphazard and hilarious back story. The simplicity and thoroughness of character creation.

Cons: The pointlessness of the Kronan conflict.

Wonder Woman Cast; Officially a Part of Batman vs. Superman

It’s official folks. The Wonder Amazon is in it! Good news! Now hopefully they won’t destroy the character and make her a damsel that supports the other two fellas. It’s been rumored for months that Wonder Woman was also joining Batman in the next Superman movie (really is it a Superman movie anymore?), but Zack Snyder and company have officially confirmed the Amazon’s involvement and have cast Israeli actress Gal Gadot in the part.

Stan Lee Shares Why Thor is a Better Character Then Superman

I agree. Superman always frustrated me with his ability to fly. Scientifically, if Thor was inordinately strong he could hypothetically fly using this method. Congratulations Stan you are correct on this. I knew there was a reason why I didn’t like Superman.

Certainly, Superman and Thor belong together. Erin Abdelrazaq of Nerd Swole reminded us of that today! Although Henry Cavill is not listed to make a cameo in this week’s Thor: The Dark World, there used to be a time when the two universes were more friendly and open to such coincidences.

Finally a female Superhero character. But I fear in a film with both Superman and Batman, Wonderwoman would be relegated to a cliched female sidekick, that needs rescuing from the men.