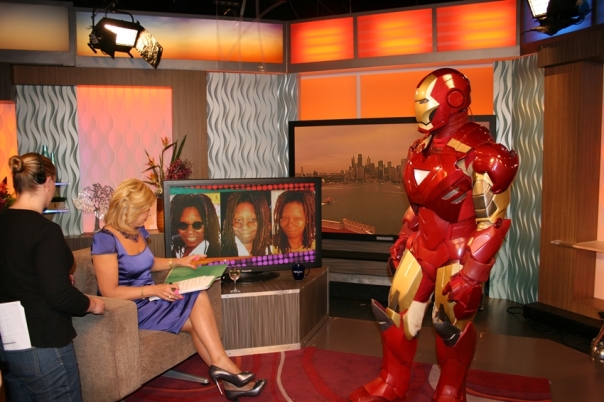 Even Iron Man has to do the talk show rounds.

Extremites, in Silver Age Marvel, reputation is everything. When the Fantastic Four were created they were thrust into fame. They had to navigate super villains and bank robbers but also fan mail and paparazzi. Iron Man, too, must navigate the dreary annoying world of public relations.

The major theme of Tony Stark’s character is his public life. Stan Lee established Tony as a swashbuckling playboy. I say swashbuckling because he looks like Errol Flynn; an intentional idea of Don Heck’s who was a Captain Blood fan. Being an  Errol Flynn knock off means Tony Stark also has adoring fans, and most important, lady callers. But his chest is iron. There is only so much the creatives investigate this problem, as the Comics Moral Code allows only suggestions of romance. It would be many comics before a character could even be shown kissing.  Tony has  no sex life even with all these women throwing themselves at him. It is tough to have one when you can’t take off your shirt and have to plug yourself in at night. 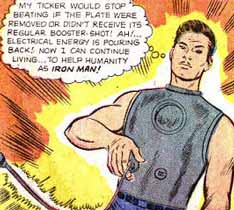 This is Iron Man’s second issue. It seems the Bullpen put all their creative energy into the origin story and there is nothing left for the character to do in the sequel.

At the outset Jack Kirby, who pencilled this one, presents us with the image of Iron Man, in all his boxy glory, fighting what appears to be a cyclops. This panel is a great example of epic Kirbyesque art but the Cyclops is an overdone villain and I am not just saying that because I just finished the Tales of Sinbad. I feel like this beast has appeared elsewhere in my journey.

After the opening panel, we are shown one of Tony Stark’s new inventions. Tony has decided to enhance the 1960s juvenile favourite, the roller-skate, to make a lightning fast method of transport for the US Army.  The concept of open travel on speedy roller skates is fraught with problems. These soldiers put wheels on their feet and travel at speeds higher then sound without the protection of a fuselage. People die easily enough with a bunch of metal separating them from the g-forced air. Without that protection, this is absurd! But this is Silver Age whimsy. Logic does not apply.

Logic is not applied to the Iron Man suit either. Before Tony can jump into action and fight off a group of man eating cats at a circus he must unravel and lock himself manually into the Iron Suit- which at this point is the MK I— although judging by Kirby’s shoddy depiction is made of aluminium foil. According to the narration this transformation takes one minute.

Tony has heart issues and his chest in incased in iron. I doubt he would be able to speed through this. I remember reading it took the usual 1960s deep sea diver an hour to get into his suit and those men were trained. How long would a billionaire lush take?

Tony gets in the suit, punches some cat,s and scares some children. The MK I and its silver veneer is very alarming to the glove wearing suburban house moms fresh from their martini lunch. Tony fixes this problem by spray painting the thing gold so he looks like a knight in golden armour. Suburbia is appeased. 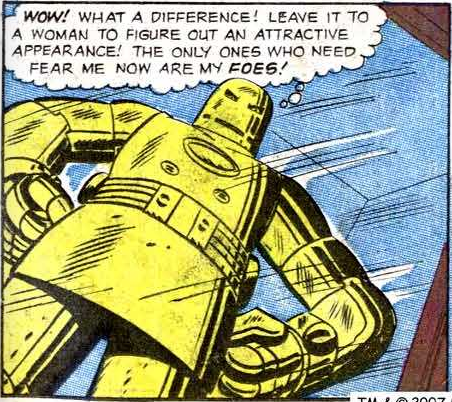 What I love about this moment is Tony says: “Leave it to a woman to figure out an attractive appearance.” It’s zeitgeist sexism like this that helps me get out of bed in the morning and pick up a Silver Age escapade.

Wait, Extremite, there’s more then just cat punching, spray painting, and sexism in this second offering. There’s also that cyclops. The Cyclops, who by the way now appears to be a neanderthal with two eyes named Gargantus, has taken over an upper New York town and told them to wall off the city from the outside world. The world, meaning the United States, is going bonkers because this town has been wiped off the map. It’s just behind a wall.

Iron Man digs under that wall and gets into a conflict with this fifty foot neanderthal — oh did I not mention he was fifty feet tall?

Forgive me, it was sprung on me too. On page 12 just after a panel showing me that this Biclops neanderthal, former cyclops, was maybe 10 foot. Perhaps it was his ability to hypnotize that distracted me … oh he can hypnotize too.  He’s a robot front for an Alien invasion.

You know, Extremite, that’s what I love about Silver Age Marvel. Just when you think you’ve read the stupidest story,  a stupider one slaps you in the face.

With that adoring endorsement, as always, Extremites, I remain: Julian Munds.

Cons: Just about everything. The villain, if there is one, makes little sense. The aliens look like geese or the Grinch. Tony Stark is an empty character although he does bare striking resemblances to both James Bond and the rumours of Rock Hudson with his alter ego. This dichotomy would be later investigated better.

I possess a degree in Theatre and Drama from the University of Toronto. I own my own theatre company called Snobbish Theatre. We focus our work on new versions of classics.
View all posts by Julian Munds »